Advanced Review For Bear, Otter, and The Kid

As promised, below is an advanced review for my debut novel Bear, Otter, and the Kid.  D.W. Marchell, a fellow Dreamspinner author, was kind enough to read my story and wrote a very nice review (my first!).  I know that not all reviews will be as great as this, but I'm glad that I had this one as my first.  I'll release the final sneak peak tomorrow right here and Bear, Otter, and the Kid will be released 8.12.11.
**************
When you read “Bear, Otter and the Kid”, you will have the great honor and privilege of meeting Derrick McKenna - you can call him “Bear” - and his younger brother Tyson - you can call him “Kid”.  But be forewarned!  This is a story full of betrayal, lost dreams, confusion and sacrifice.  But it is also a story about friendship, commitment, selflessness, being true to oneself and ultimately, a story full of love.
Anyone who knows me will understand why stories featuring family make it to the top of my very long TBR list.  And this touching story was no exception.  From the very first page, I was hooked.  Bear is seventeen, a few days away from graduating high school and looking forward to venturing out, on his own, into the world, away from home for the first time.  Life has not been terribly kind to Bear, but it has blessed him with a precocious little brother, Ty, who adores his older brother.
It is this dynamic that helps them survive when their mother - the only parent they have ever known - makes a decision that will see all of their lives changed forever.  Bear will have to sacrifice his own desires, Ty will learn that trust is a very fragile thing indeed and both brothers will forge an indestructible bond that will leave you positively breathless with its sincerity and beauty.
But Bear and the Kid are not completely alone.  With the help of a colorful and eclectic group of friends, Bear and Ty find themselves surrounded by love, friendship and a family of their own making.  There is Anne, Bear’s on-and-off-again girlfriend, Creed, Bear’s best friend since second grade, Mrs. Paquinn, the wonderfully warmhearted and insightful elderly neighbor who babysits the Kid, and - last but not least - there is also Oliver - you can call him “Otter” - who is Creed’s older brother.  Each of them has a story to tell, and you will find yourself falling in love with all of them as they try to make the perilous journey to becoming a family.
Of course, I’m not going to tell you what happens, but please believe me while I explain that you simply must read this story.  It will disarm you, infuriate you, beguile you and leave you utterly speechless.  There are moments of such tenderness that you will want to make sure to have a Kleenex or a shirt sleeve handy.  There are moments of such injustice that you will want to curse me for telling you to read this story.  And there are  moments of such good-natured hilarity that you will wonder, while you are laughing out loud, why you ever cursed me in the first place.
“Bear, Otter and the Kid” is the debut novel for T.J. Klune and I know I will not be alone when I sing his praises for creating an unforgettable cast of characters who learn what it means to be part of a family.  I invite you all to join them as they discover that a family is not only made through blood, but also through laughter, through sweat and through tears.
****************
D.W. Marchwell is the author of "An Earlier Heaven", "Good to Know", "Sins of the Father", "Falling" and it's upcoming sequel "When Memory Fails" to be released from Dreamspinner Press on 8.5.11.
Posted by TJ Klune at 5:33 PM 1 comment:

The Cover Art Of Bear, Otter, and the Kid. 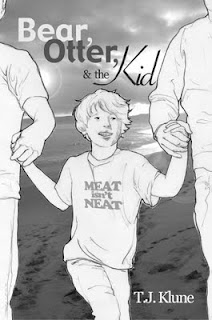 I absolutely loved it.  Even without the color, I saw it exactly for what it was supposed to be. 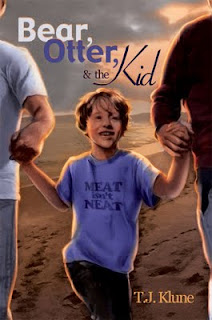 My god, it's simply beautiful.  All the credit, of course, goes to Paul Richmond.  That man is a genius.  The detail is amazing.  It's really everything I could have ever have hoped for from my first cover.  Only a couple of more weeks!
Posted by TJ Klune at 5:43 PM No comments:

Pre-Release Jitters, My First Interview & First Review: Or, How I’m Trying To Not Sound Like a Douche Bag

The official song for Bear, Otter, and the Kid

As I teased last week, the local Tucson band Dash Pocket has allowed me to use the WONDERFUL song "Rain" to promote the release of Bear, Otter, and the Kid which will be released on 8/12/11.  This song is fucking gorgeous and seriously captures everything and more that I want people to take away from my debut novel. Click the link to listen to it on Reverbnation at the top of my blog.  I've posted the lyrics at the end of this post.  The player is on top of the screen, it takes a second or two to kick in.  This song and a few others are available for download free of charge.  If you're a Tucson local, Dash Pocket will be performing Saturday 7/23/11 at Nimbus They are also on Facebook to follow.  I hope you all love it as much as I do!

Here we are, guys and gals: one month from today, Bear, Otter, and the Kid, will be released by Dreamspinner Press.  I can't tell you how excited I am for people to meet my three boys.  The first peak into the book is posted in the notes section on my FB profile (in addition to the blurb), showing the relationship between Bear and his younger brother the Kid.  Here, we meet Bear and Otter.

Otter has been gone for three years and suddenly returns out of the blue, throwing Bear's well ordered world into chaos.  Bear still has a lot of anger at what he considered to be Otter's abandonment, and doesn't know what it means now that Otter is back.  Let me know what you think!  I'll post a final preview on 8/1/11.  Enjoy.
******
It's raining harder now. I don’t say anything when I get back into the car, and I hope that Otter doesn’t want to talk, either. Most people don’t realize that it’s nice to not talk every now and then. Talking makes things real.  Talking puts things in the forefront. Talking is a waste of time. Nothing ever gets solved by talking about it. People speak too much and regret what they say, but if you don’t speak at all, you can’t feel like a jackass later.
I glance over at Otter out of the corner of my eye. His face is unreadable from what I can see, and that’s only when a street lamp overhead passes by and flashes through the window. I think that maybe Anna can see things that I can’t. She’s kind of cool like that, having insights into people that I never have. Yeah, I give her shit about it, telling her she’s prying where she’s not wanted, telling her that she’s projecting, but usually she’s right. I sigh and look back out the window.
“What?” Otter asks.
“What what?” I say.
“It sounded like you just said something.”
“I didn’t.”
“Oh.”
It’s quiet a little bit longer before, “So you and Anna still, huh?”
“Me and Anna,” I say.
“You guys have been together for a long time.”
“I guess. Off and on.” 5… 4… 3… 2… 1….
“So how’re you holding up, Bear?”
It’s inevitable. People always ask me this like I am going to break. Like I’m going to fall down and never get up. I wish people weren’t so predictable. I wish Otter wasn’t so predictable.
“Fine.”
“Oh.” A minute passes. Then, “Well, you seem to be doing well. And Ty, man, the Kid seems to be getting bigger all the time.”
“People change. That’s what happens when you disappear for a while,” I think, then bunch my fists as I realize I said it out loud. Shit.
“Disappear?” he asks, sounding genuinely surprised.
“Forget it.”
“What do you mean, forget it? You can’t say something like that and expect the conversation just to be over because you say it is, Bear.” I can hear him gritting his teeth and I think it’s because he’s mad. Good. Let him be mad.
“Yes, I can,” I retort, hating how I sound.
Another minute passes. Rain on the roof beating a song.
I hear Otter snort and shake his head. “I didn’t disappear, Derrick. You knew where I was.”
At that moment, I hate him. Using my name like that, like he’s talking down to me, like he’s better than me, like he’s talking to a child. That’s something my mom’s infinite string of boyfriends use to do. I was never
Bear to them, not that I wanted to be. But the way they said it, that knowledge in their eyes, grinning at me when my mom wasn’t looking.  Always with the same thought: Yeah, I’m here with her. What are you going to do about it? Stay home and take care of your brother like you’re supposed to.
“You left, Oliver,” I snap at him. “Call it whatever the fuck you want, but you left.”
Posted by TJ Klune at 6:33 PM 1 comment:

Email ThisBlogThis!Share to TwitterShare to FacebookShare to Pinterest
Labels: and the Kid, Bear, Otter

Would ya look at that?  I'm not computer idiotic after all!  I was even able to get this go over to Facebook. (don't look at me with such sarcastic awe--if you knew me, you'd know how difficult that was.)(and I had help--thanks Michele).

So here's the deal.  My first novel Bear, Otter, and the Kid will be published on 8/12/11 by Dreamspinner Press.  It's a gay dramedy that features misanthropic seagulls, jumping castles, a birthday party that does not end up on To Catch a Predator, the ocean, bad poetry, and the smartest nine year old vegetarian eco-terrorist in training.  It's also a love story between two guys who didn't think they would ever see each other again.  Here's the official blurb:

Three years ago, Bear McKenna’s mother took off for parts unknown with her new boyfriend, leaving Bear to raise his six-year-old brother Tyson, aka the Kid. Somehow they’ve muddled through, but since he’s totally devoted to the Kid, Bear isn’t actually doing much living—with a few exceptions, he’s retreated from the world, and he’s mostly okay with that. Okay that is, until Otter comes home.

Otter is Bear’s best friend’s older brother, and as they’ve done for their whole lives, Bear and Otter crash and collide in ways neither expect. This time, though, there’s nowhere to run from old feelings that threaten to rise. Bear still believes his place is as the Kid’s guardian, but he can’t help thinking there could be something more for him in the world... something or someone.