The Playlist for Burn 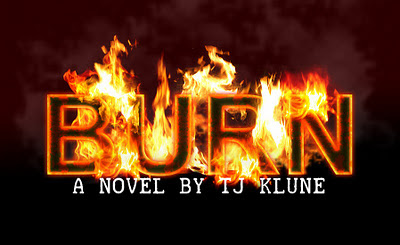 
Hey gang.  We are at 16 days and counting until the release for my second novel, Burn!  I can't wait for you to see what's in store.  Below, you'll find the complete playlist for the book.  Each song was carefully picked because of the nature of the music/lyrics/sound.  Some of the lyrics are very important to the course of the story, so if you're looking for clues, these songs are a great place to start.  I will post three videos of the songs I feel are the true essence of Burn.

And another thing.  I recently downloaded the app for my phone Pandora.  I know, I know, I am way behind the times.  If you don't know what it is, essentially it gives you the capability to create your own radio station with the music you like and then you are able to share it.  I've thought about making a BOATK radio station.  Thoughts?  Do you use Pandora?

Anyhoo, the set list!  I hope you like these songs as much as I do.  I think they are exactly what Burn is all about.  And, as a last note, obviously I do not own the rights to any of these songs. =D

We have cover art! 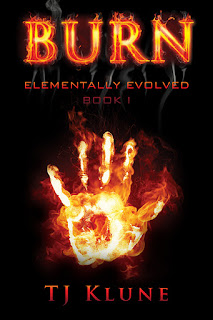 The BOATK Short: Word Of The Day

The Goodreads Awards And A Promise I Made

Gonna tell you some stuff.

The Goodreads M/M Group Awards were held yesterday and to be honest, I didn't think BOATK stood a chance.  It's one thing to have people tell you they voted for you, but it's another to actually see the results of that voting.  I mean, come on:  they had something like 1900 responses to the ballots?  And a book that has to do with *dreaded word* CHILDREN?!?!?!?!?  Well bless my stars and garters! There was no way in hell that it was going to work!  I know people liked BOATK, but for the year?  With multiple releases from Amy Lane, Mary Calmes, and a little book called Hot Head by Damon Suede, there was no fucking way it was going to happen.

I am way happy to report I was wrong.

Congrats to all the other winners and nominees. I've read alot of them, and I can say that they are all well deserved.

I am impressed by the showing Dreamspinner had. I can honestly say that I am honored to be able to publish with them.  From Damon, and Amy, and Mary, and all the other DSP winners, I am so proud of my publisher.  I can admit that there are times when DSP doesn't put out the best work (but that is the same with ANY publisher) and there are times it feels like I am waiting for something (WHERE IS THE COVER FOR BURN!?!?!?!?!?!) but I wouldn't change a damn thing. I love DSP to pieces.

And thank YOU to all who voted on this. You humble me, good readers!

Sorry?  What was that?

Oh, right.  My bad.  Yes.  I did make a promise, didn't I?  The Kid won his award (by like a 20% margin in the votes!).  So that means I will be writing a new short starring the Kid. I have an idea about what I am going to do, though I won't say what.  I am not going to say when either, only that it should be ready soon.

Oh, and one other thing!  Have you "liked" my author page on Facebook?  Those that have get exclusive content about the Elementally Evolved Trilogy and The BOATK boys before anyone else.  Why, just yesterday I revealed the prologue and first chapter titles of the BOATK sequel!  (I do love me some teases.)  Here's the link if you are on FB: TJ Klune Author Page

Again, thank you for the votes. You guys rock! 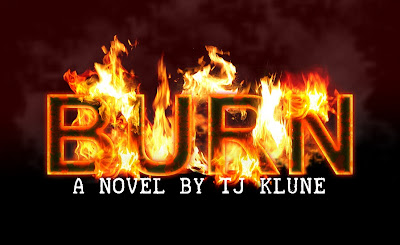 From the author of Bear, Otter, and the Kid comes the beginning of an epic new
trilogy.

Set in a world that closely resembles our own, Burn is a story of redemption and
betrayal, of family and sacrifice, all of which leads to the greatest question
of all: how far would you go to save the ones you love?

Fifteen years ago, Felix Paracel killed his mother with fire that shot from his
hands. Since then, he has hidden from forces bent on exploiting him and his fire
and wind Elemental abilities. But Felix's world is about to change, because he
is Findo Unum—the Split One—and his coming has been foretold for generations.

Though Felix's arrival brings great joy to the Elemental world, it also heralds
a coming darkness. No one knows this better than Seven, the mysterious
man who rescued Felix from that horrible fire years ago and then disappeared;
Seven, who has returned to claim what's rightfully his: Felix's heart. But even
as Felix begins to trust Seven and his feelings about his place in the world,
the darkness reveals itself, bringing consequences no one could have predicted.

Seven Fortis: A non-Elemental, or a "Normal," as they're referred. Also known as
the Luravit Cor to Felix, as revealed in the first excerpt. What does Luravit
Cor mean? Sure sounds like Latin, doesn't it? As a matter of fact, a lot of this
world is based in Latin. Strange.

Edna Brunelle: Sixty-seven year old Fire Elemental, one of the more powerful in
the world. As a Magister—teacher—to the Split One, she will help Felix with the
Fire side of his abilities. Has an affinity for younger men.

Dan Evans: A powerful Wind Elemental, the other Magister--teacher--to Felix.
Came to the group after his name came up on a list of Elementals the government
were bent on tracking down.

Otis Moore: An Elemental capable of controlling fire, who also has an affinity
for all things weapon-related. He and Seven grew up together and have been best
friends since they first met at the age of six. Years before the story starts,
an event led to a vicious attack, partly handicapping Otis's mind. He's a
functional adult, but given the brain damage he sustained, he is not the same
person he used to be. Some consider him now to be an idiot savant.

Jason Taylor: Best friend to Felix Paracel (though, he only knows him by Felix's
cover name, Atticus Vanesco, and does not know that Felix is an Elemental). He
is a Normal (a non-elemental) and a cop with the Terra City PD. He's always
considered himself to be Felix's protector, but he can't shake the feeling that
something is coming that he has no control over.


Thaddeus Paracel: Father to Felix Paracel, husband to Felix's mother, who Felix
accidentally killed as a child. After the night of her death, Thaddeus took
Felix into hiding, keeping him away from the world and those bent on finding
Felix. Felix suspects his father knows more than he's saying about the event's
of Felix's life, even down to the point of what Thaddeus does for a living.


Kammy Basileus: Earth Elemental, part of Seven's team of Elementals. Previously
was romantically involved with Seven Fortis, she doubts Felix's capabilities
which she lets him know on a regular basis.

Trailer for Burn (as made by Jennifer Taylor and Nik Simmons):

(Probably a good idea to pay attention to the lyrics.  The song is "The Humbling River by Pucifier.)

Link to previous excerpt (read this first, as the second excerpt is a continuance of the same scene: Burn Excerpt 1

BOATK2 Who WE Are Teaser:  Since Seven is a main character in Burn, just know that the seventh chapter in the sequel to BOATK is called Where Bear Goes To A Gay Bar.
Posted by TJ Klune at 9:21 AM 5 comments: