My New Novel(s) And What's Next 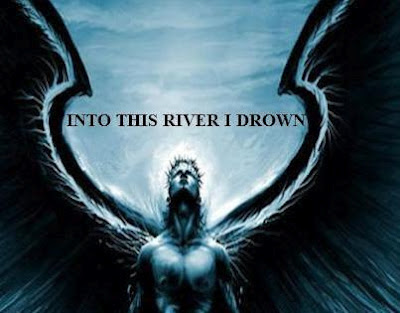 Starting a novel can be a scary, scary thing.

Finishing a novel, to me, is even scarier.

If you follow me on Facebook or read my previous post from 5/27/12, you’ll know that I’ve been working on a new book. Titled Into This River I Drown, I wrote it with my father in mind. His passing was hard on me when I was a kid, and I’ve learned that pain like that never truly goes away. It just becomes more bearable. It’s probably not the healthiest way to live, but I think I’d rather miss him every day then not miss him at all.

So for the past 54 days, I wrote like a fiend on this new book, scraping open old wounds, discovering new ones. This book made me happy, made me angry. It made me depressed, it made me cry. I laughed at certain points and I sobbed at others. Quite manic, right? Yes and no.

I’ve been told I am an emotional writer, meaning I can, for the most part, bring the reader in and feel the emotions of my characters (which, probably is just a euphemism for being manipulative). Whether or not that’s true, I’ve told you before that I am not necessarily an emotional person. I don’t tend to cry at a lot of things. Sad movies don’t make me cry usually (unless, for some reason there’s a dog involved, because you know, you just know the dog is going to die for some reason. Even the worst movies ever cause me to break down if there’s a dog involved—I’m looking at you Marley and Me. You bastard). Books rarely make me cry. People rarely make me cry. If you had told me when I started writing ITRID that I’d be an emotional mess almost every single day, I would have laughed in your face and told you to go fuck yourself.

Boy, was I wrong.

And this is not to say it’s a depressing book, because it’s really not. It’s about hope. It’s about love. It’s about the people who are no longer with you but you know are watching over you. It’s about friends and family, it’s about the mysterious and the impossible. But the subject matter hit so damn close to home for me that I was a wreck the whole time.

But still I pushed on.

Yeah, I cried a bit again.

ITRID, completed 6/28/12, is the longest thing I’ve written, even longer than Burn. Since this is the case, I’ve made the decision (as I previously announced on FB a few weeks back) that I would be splitting it into two books. The first will still retain the ITRID title. The second book will be called The River Crossing. If all goes well, I plan for the books to be released within a few weeks of each other, so that cliffhanger on the first book will not seem so killer. And to be clear, this is one story, not first book and then a sequel. The second book will pick up right where the first one left off with little to no back story put into the second book to bring people up to date. I don’t think that filler will be necessary. Or, rather, I should say I hope it’s not necessary, that the characters will be vivid enough that you’ll be able to jump right back into the book while remembering what has happened already.

Here is the blurb for the first book:

At once an exploration of grief and faith, Into This River I Drown is one man's journey into the secrets of his father and discovering the strength to believe in the impossible.

Five years ago, Benji Green lost his beloved father, Big Eddie, who drowned when his truck crashed into a river. All called it an accident, but Benji thought it more. However, even years later, he is buried deep in his grief, throwing himself into taking over Big Eddie's convenience store in the small town of Roseland, Oregon. Surrounded by his mother and three aunts, he lives day by day, struggling to keep his head above water.

But Roseland is no ordinary place.

With ever-increasing dreams of his father's death and waking visions of feathers on the surface of a river, Benji's definition of reality is starting to bend. He thinks himself haunted, but whether by ghosts or memories, he can no longer tell. It's not until the impossible happens and a man falls from the sky and leaves the burning imprint of wings on the ground that he begins to understand that the world around him is more mysterious than he could have possibly imagined. It's also more dangerous, as forces beyond anyone's control are descending on Roseland, revealing long hidden truths about friends, family, and the man named Calliel who Benji is finding he can no longer live without.At once an exploration of grief and faith, Into This River I Drown is one man's journey into the secrets of his father and discovering the strength to believe in the impossible.


So, as you can see, it’s quite different from my other books.

But now, for the most part, it’s finished. And that scares the crap out of me.

When you first start a book or are in the middle of writing one, it’s so easy to get lost and let the world pass you by without so much of a second thought about it. When a story wraps you up as much as ITRID did to me, it takes it a step further and engulfs you completely.

For the 54 days, this book has been my life. Sure, I’ve gone to work, and I’ve gone out with friends, but I slowly pulled away, burying myself into ITRID. And now that it’s finished?
Well, shit.

I spent the next few hours after completing it feeling a bit lost, to be honest. Before this book, I hadn’t written anything in three months and then it took over everything and now it was done? What if I couldn’t find that kind of story again? What if I couldn’t write another word? What if I close the word doc for good?

And then I realized. Ew. I sounded way fucking gross and needy and like a whiny ass little bitch. I told myself to shut the fuck up and stop sniveling. Oh, poor me! I’m so worried about what to do now! Oh boo-hoo! If only the world had my problems!

In case you can't tell, I am my own harshest critic.

So to appease that critic, I started two things. One, is brand new and it’s an idea I’ve been playing with for a while. It’s a romantic comedy and will be the least angsty of all my works. I am not going to say anything else on it for now, other than there's a homophobic parrot named Johnny Depp involved.

Well, the second thing I’m started working on is a work in progress I’ve had for a bit but haven’t made any headway on recently, much to the screams of the readers of the first book. So I am happy to say that Elementally Evolved Book II: Break is back on track and boy, do I have some fucking evil plans for it. I plan on knocking your fucking socks off by the time it’s finished, more so than I did with the ending of Burn. I already have about 45K words done on it and it will be my priority for now. I think I’ve left Seven and Felix and the rest of the Circle hanging long enough, don’t you?

So my plan now is to stay busy, to keep writing. I don’t want to be scared when I stop because I don’t think I’ll have anything else to write. I’ve got plenty to write to keep me busy for quite some time (after all, Ty and Dom aren’t going to wait forever for their story either). And being busy is exactly what I need.

PS: 8/12/12 is a neat date to watch out for. If anyone can figure out what that date signifies, you'll probably have a good idea what I'm going to do that day.