How I Spent My Xmas Vacation

So I had this big old long blog post ready to go about my favorite shit of 2011.  But through the magic that is technology, it somehow got deleted, and the prospect of doing it all over again is making me nauseous.  I may have even said "Fuck you, computer!" in a very irate manner.  Just know there was shit I liked in 2011, some more than others.  The End.

So here instead, are things I learned and things I did on my Xmas vacation.

--When you have 12 straight days of vacation coming up, the work day stretches to infinity.  You know what I mean.  Those days approaching seem to last forever, and it SUCKS when you look at the clock, sure a few hours have passed only to realize it's been 14 seconds, well... just know that I hate that.

--That dawning sense of freedom you get when the day arrives?  When the clock says "Be free, my child!  Run like the wind and never look back!"  and you can't help but be in a good mood, and even though those around you aren't going on vacation and they are trying to do their best to put you in a bad mood, but it doesn't work because they're all just jealous ass hats?  I love moments like that.

--So I said "Good-bye, dear co-workers!" waving at them (and also secretly flipping them off.)  I ran from my cubicle and out the door to my car and drove home.  Of course, on the way, I stopped at the store and bought hard alcohol.  Keep in mind that I'm a lightweight (two beers makes me drunk) so that bottle will be in my freezer forever.  What can I say, I'm a cheap date.

--Knowing full well it was Xmas in a couple of days and that I was leaving for Prescott, AZ the next, I immediately proceeded in wrapping the presents.  Now, there is something you should know about me.  It is my secret shame.  I, as a gay man.....cannot wrap presents.  Look away, I'm hideous!  Seriously.  It's awful, the job I do.  Take a normal simple box, and when I'm finished "wrapping" it, it'll look like one of those avant-garde pieces that is supposed to be "art" but that people don't really understand.  To much tape.  The corners folded weird.  Paper torn.  I was told once that my present wrapping abilitity ruins Xmas.  That person doesn't get presents from me anymore.  Bastard.

--I had to drive four hours up to Prescott.  By myself.  I told myself I would use that time to work out some plot kinks for Burn Book II, but instead spent the entire time going through my CD's (Yes, I still use CD's.  Yes, I still buy CD's.  No, I don't have an iPod.  Bite me) picking out ones that I hadn't listened to in forever.  What did I learn about myself musically?  A few things: first, I have some awesome music (Breaking Benjamin, Mumford and Sons, Florence and the Machine.)  Second, I have some of the gayest music ever (Don't even ask how many Britney albums I have.  Okay, fine, eight.  Shut up).  Third, I may be the best singer in the history of ever.  (okay, that last was a lie.  I'm sorry I lied.  I can't sing at all, but I really like to think I can.)

--I was staying in Prescott for a few days following Xmas because my sister was donating a kidney to another dude and she needed someone to drive her to Phoenix and back for the surgery and also to watch my eight year old nephew Noah, the most supreme badass kid to have ever existed.  So I packed a shit load of clothes.  Two bags worth.  Don't look at me like that.  I know I have a disease.  But at least I look good.

--Prescott AZ is in the mountains.  I fully expected there to be snow.  I was not disappointed. 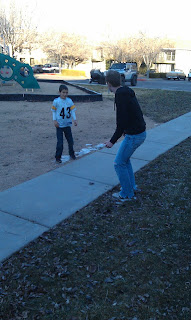 See that little patch of white I'm standing on?  SNOW!!!!

--My favorite part about Xmas?  Oh, I could say the time spent with family, the meaning of the holiday season, the joy of giving to others, but that's bullshit.  Everyone likes presents, no matter their age.  If they say otherwise, they're a liar and a fat mouth.  I got an impossible new smart phone that I'll never be able to use (it's called a Droid Razr.  No, I didn't mis-type that.  Apparently it's way hip to misspell "Razr". Is it so much trouble to add in the extra "o"?  Pretty soon, everything will be abbreviated and nobody will know what anyone is talking about.  Prepare for the future!)  But look what else I got! 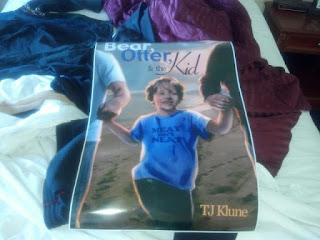 A full sized BOATK poster! It makes me feel kind of famous, and then I realize how douchey that sounds.  But then I get over it because I have a BOATK poster. 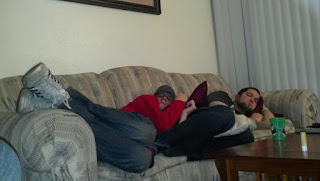 --So after Xmas was over, we drove down to Phoenix so my sister could have her surgery.  And of course, that would mean leaving me in charge of an eight year old.  What did I learn in the two days I had Noah.  HOLY FUCKING CHRIST KIDS ARE FUCKING EXHAUSTING.  JEBUS CRISP!!!!!  And emotionally manipulative.  Case in point:

"Noah, we just ate, how can you be hungry again?"
"Well, there's a Wendy's right there and they have root beer floats which are my favorite."
"Haven't you had enough sugar the past few days?"
"My mom let's me get root beer floats."
"Dammit.  One root beer float, please."

But you know what?  I love the crap out of that little dude.  He is so fucking hysterical.  He's so fucking smart.  He's so fucking awesome and those two days where it was just me and him were some of the best I've had in long while.   How can it not be when, while we were randomly in a Lowe's store, he told me that all the employees working there were really terrorists and we had to avoid them otherwise they'd get us and so we literally played hide and seek with Lowe's employees (even though they didn't know they were playing with us) because had they caught us, we would have been taken back to their base and tortured?  How can it not be when he looked me in the eye and said "I'm really glad you and I get to hang out, because I miss you when you're not here."

--My sister pulled through the surgery with flying colors, and the recipient got a new lease on life as apparently his new kidney started working almost right away.  How rad is that?

--I drove them back up to Prescott and turned around and drove another four hours home.  I was good until the last hour or so and then I was fucking miserable because I had been sitting for so long.  So I started thinking about what would happen if the world really ended in 2012.  What would I have said I'd wished I'd done?  You know my dream to go to Stonehenge.  I also want to say I've been to the Amazon River.  And stood at the Grand Canyon (I know, I know: I live in Arizona, how the hell could I never have been?).  There's so many things I want to do in life, so I hope that the world doesn't end next  December.  (Apparently it's supposed to end Dec 23rd.  Which, if true, means we just celebrated our last Xmas as a human race!  PREPARE FOR FIRE!!! AAAAAAAAAAAAAAAAAA)

--I still have four more days until I have to return to work.  Little bro and I are going shopping today and then to see the new Mission Impossible movie.  Did you know that Tom Cruise is like only 5'8?  How adorable is that?  It goes to show that even short closeted people can make it in Hollywood.

Felix Paracel—narrator. An Elemental capable of controlling fire and wind, possibly the only dual Elemental in the world. Called Findo Unum—the Split One.

Seven Fortis—A non-Elemental, or a “Normal,” as they’re referred. Also known as the Luravit Cor to Felix, as revealed in the first excerpt. What does Luravit Cor mean? Sure sounds like Latin, doesn’t it? As a matter of fact, a lot of this world is based in Latin. Strange.

Edna Brunelle: Sixty-seven year old Fire Elemental, one of the more powerful in the world. As a Magister—teacher—to the Split One, she will help Felix with the Fire side of his abilities. Has an affinity for younger men.

Otis Moore: An Elemental capable of controlling fire, who also has an affinity for all things weapon-related. He and Seven grew up together and have been best friends since they first met at the age of six. Years before the story starts, an event led to a vicious attack, partly handicapping Otis’s mind. He’s a functional adult, but given the brain damage he sustained, he is not the same person he used to be. Some consider him now to be an idiot savant.

Jason Taylor: Best friend to Felix Paracel (though, he only knows him by Felix’s cover name, Atticus Vanesco, and does not know that Felix is an Elemental). He is a Normal (a non-elemental) and a cop with the Terra City PD. He’s always considered himself to be Felix’s protector, but he can’t shake the feeling that something is coming that he has no control over.

Thaddeus Paracel:  Father to Felix Paracel, husband to Felix's mother, who Felix accidentally killed as a child.  After the night of her death, Thaddeus took Felix into hiding, keeping him away from the world and those bent on finding Felix.  Felix suspects his father knows more than he's saying about the event's of Felix's life, even down to the point of what Thaddeus does for a living.

Kammy Basileus: Earth Elemental, part of Seven's team of Elementals.  Previously was romantically involved with Seven Fortis, she doubts Felix's capabilities which she lets him know on a regular basis.

One last thing:  the opening quote for Burn?

I will burn, but this is a mere event.
—Michael Servetus
Posted by TJ Klune at 5:35 PM 4 comments: